Novosound is delighted to announce that Dr Dave Hughes, Novosound’s Founder and CTO, has been named as IoD Scotland Director of the Year in the Start-Up category. In a year that saw almost 200 entries and 54 final contenders, this prestigious award is a testament to Dr Dave’s brilliant leadership.

In just two years, Dr Dave has developed from an academic to a high-growth entrepreneur, overseeing the technical direction and vision of Novosound to build a global business with disruptive ultrasound technology. Since spinning out from the University of the West of Scotland (UWS) in 2018, Novosound has raised £5.8m investment; recruited over 30 employees and achieved ISO:9001 accreditation whilst generating revenues in the industrial inspection market with global customers. These successes are a measure of how far the company has come in such a short space of time and could not have been achieved without Dr Dave’s tenacity, drive and creativity.

Faced with the extremely difficult task of navigating Novosound through the recent Covid crisis, Dr Dave’s strong leadership skills have enabled the business to continue growing and moving forward – simultaneously benefitting employees, customers and stakeholders. As a result, Novosound has emerged stronger and is primed to take on future challenges in a rapidly changing market. 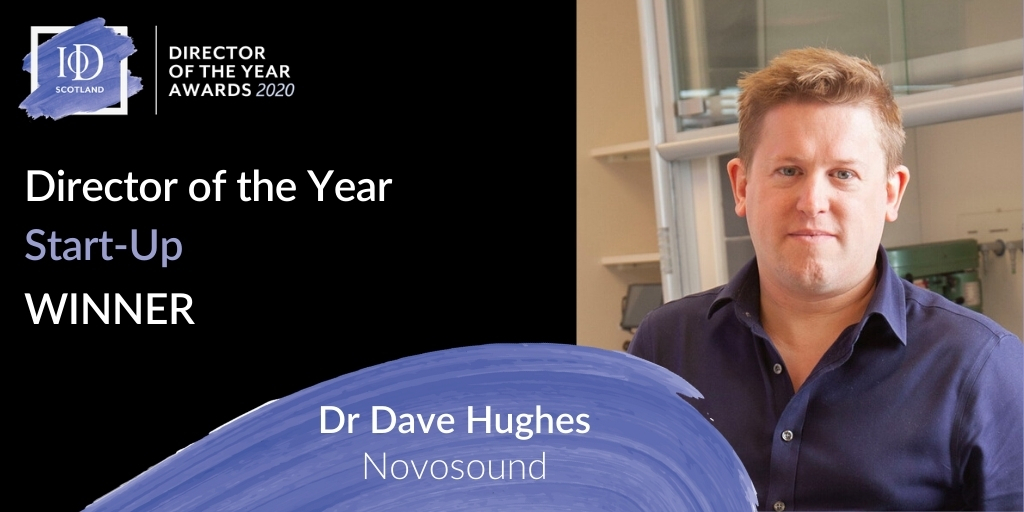 “Dave has already established an international leading business, built from an academic background and University spin out. He has created quality jobs for talented people in Scotland and his ambitions for continued growth are admirable.  The business is providing a highly innovative and sought-after scientific service. Dave has in-depth expertise in his given field but has also made the move to being a business owner and effective company director.”

“It is an honour to win this prestigious award: it’s a real testament to what the team and I have achieved in the last two years, as well as a great accolade for me personally. Each day at Novosound is an adventure and I’m grateful to all the team who have helped to grow the company to the global business it is today. With the recent appointment of our new chairman, Dr Derek Mathieson, and imminent product launches, it’s set to be an exciting year ahead for Novosound as we aim to rapidly scale up and grow to the next level”.

The IoD award is the latest success in a series of triumphs for Dr Dave. In addition to winning the IoD award, he has recently been awarded Visiting Professorship at the University of the West of Scotland (UWS). It was during his time as a Research Fellow at UWS where Dr Dave invented Novosound’s core IP - emerging as the first spin-out company from UWS. This award is a testament Dr Dave’s combined academic expertise and commercial acumen, reflecting his ability to rapidly export an idea from the lab to the global marketplace.