Novosound announces a £3.3 million investment in its award-winning novel thin film ultrasound technology.
The Foresight Williams Technology EIS Fund led the round, investing £1.5 million alongside £500,000 from the Foresight Scottish Growth Fund, financed by the Scottish Growth Scheme through a combination of Scottish Government funds and the European Regional Development Fund (ERDF), and £1.3 million from existing shareholders including Par Equity, Kelvin Capital, Gabriel Investments the University of the West of Scotland, and the Scottish Investment Bank, the investment arm of Scottish Enterprise.
Novosound was established in 2018 by Dave Hughes, CTO, and Richard Cooper, CEO, as a spin-out from the University of the West of Scotland, where Hughes invented its core IP during his time as a Research Fellow.  Cooper brings industry expertise as a successful technology entrepreneur. 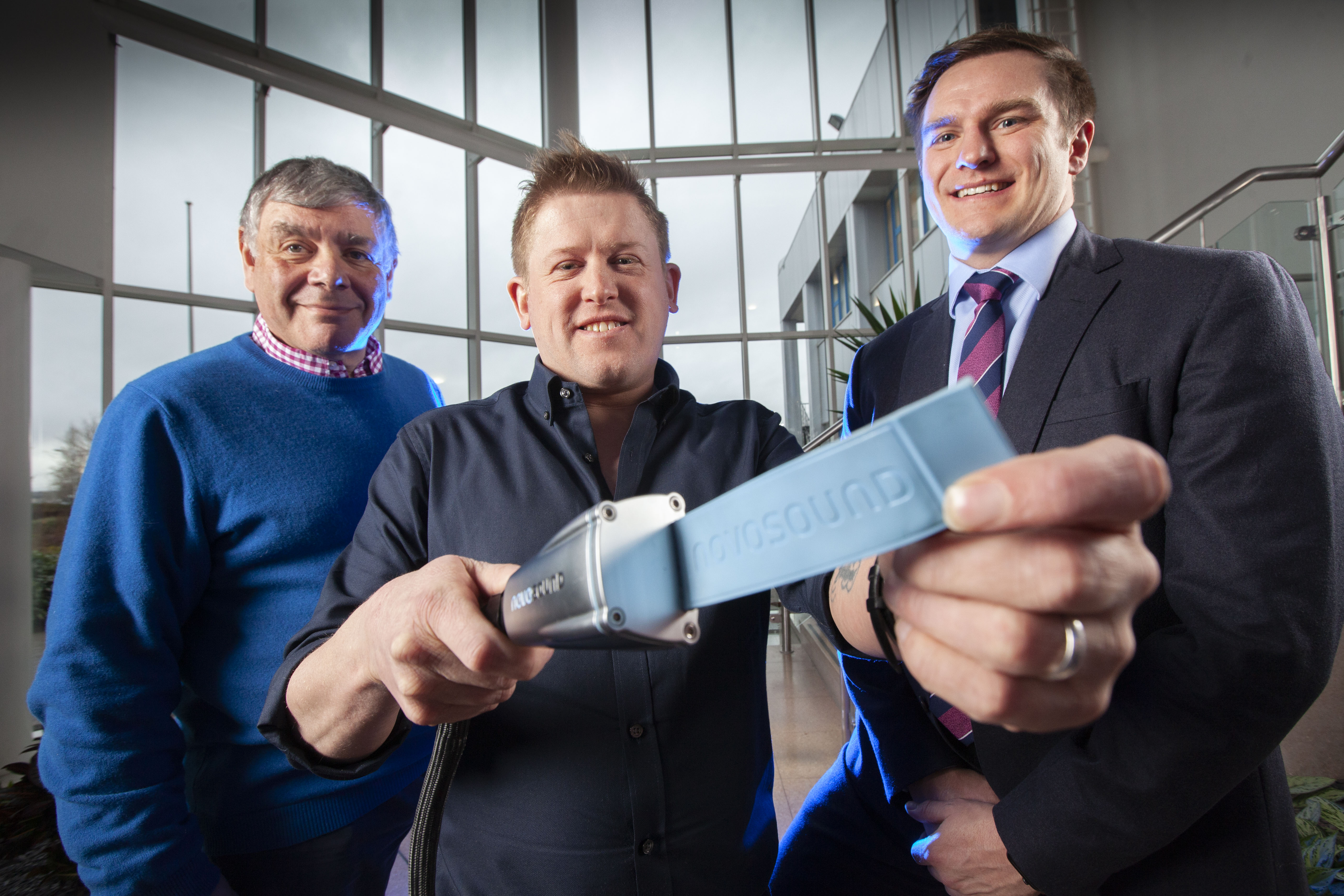 Ultrasound sensors produce sound waves with frequencies above human range which transmit through an object to measure or image internal features. Commonly known for its use in maternity wards and other hospital departments, ultrasound imaging is also extensively applied in industrial settings as a safe Non-Destructive Testing (“NDT”) technique for revealing below-surface deformities, cracks or corrosion.
Utilising the latest thin film deposition techniques, Novosound’s patented innovation represents a turning point for ultrasound sensor technology.  Operating in a high growth market valued at £35 billion, the Company has developed a unique thin film core material which eliminates limitations associated with existing ultrasound sensor solutions.
The new sensor technology has enabled the company to produce higher resolution imaging, ‘fit and forget’ sensors that can operate continuously at high temperatures, and the world’s first truly flexible ultrasound sensor.  Whilst the technology will allow the company to develop products for the healthcare and wearables markets in future, at present, applications of the technology centre around the NDT market. Novosound’s flexible sensors can significantly improve the inspection of curved surfaces in aerospace, automotive and industrial applications. Its ‘Fit and forget’ sensors, with the ability to withstand high temperatures and be permanently installed, enable completely new applications such as the real-time monitoring of high value oil and gas assets, to predict necessary maintenance and greatly reduce downtime.
The investment will allow the Company to match fund a £1.0 million R&D grant for product development from Scottish Enterprise and pursue its ambitious expansion plans into global markets and new industries.  The Company will draw on Foresight’s track record of supporting the growth of early stage, innovative technology companies, and Williams’ extensive expertise in ultrasound NDT techniques currently applied by its F1 team.
Andrew Bloxam, Senior Investment Manager at Foresight, commented:

“Novosound is a brilliant example of the type of disruptive technology and team that we look for. Its early traction in NDT really stood out to us. There is also huge potential for other markets that it has not yet pushed into, which makes it a really exciting opportunity.”

“Novosound is an excellent example of the talent and innovation coming out of universities in Scotland. We are delighted to have the opportunity to support entrepreneurs in the region and invest into early stage innovative Scottish businesses through the Foresight Scottish Growth Fund in partnership with Foresight Williams Technology EIS Fund.

The highly disruptive technology developed by the Company has global market application with the potential to contribute to increased productivity with applications across many industries including oil and gas and infrastructure. The investment will also enable the Company to pursue opportunities in untapped markets such as healthcare and wearables.”

“Our technical specialists were excited to see Novosound’s game changing NDT technology and immediately realised potential applications within our operations and industry sectors. With this investment we look forward to applying our product development and manufacturing capabilities to support the growth of Novosound.”

"This investment is really exciting for the team at Novosound as it will help us scale our operations and launch our advanced sensors for industrial monitoring and inspection. We are delighted to be working with the Foresight and Williams who have proved themselves thus far as the ideal partners for our growing technology business."

Foresight and Williams announced the unique collaboration represented by the Foresight Williams Technology EIS Fund in November 2016.  It combines the Williams Advanced Engineering team's expertise with Foresight’s successful investment track record. The Fund enables investors to qualify for relief under the UK Government’s Enterprise Investment Scheme (“EIS”) for investment into early stage UK SMEs with strong intellectual property in their own specialist fields. The Fund plans to make investments of up to £3 million into at least ten qualifying UK SMEs per investor, supporting the next generation of engineering technology success stories in the UK. http://www.foresightwilliams.co.uk/
Novosound Technology
Novosound Careers
Novosound Applications